Our Strategy
Projects
Our Story
Take Action
Contact Us

Exchange for the Organization and the Promotion of Small Entrepreneurs

With your help, we support thousands of women and small farmers to develop their activities

Become a partner against pauverty and change the world! 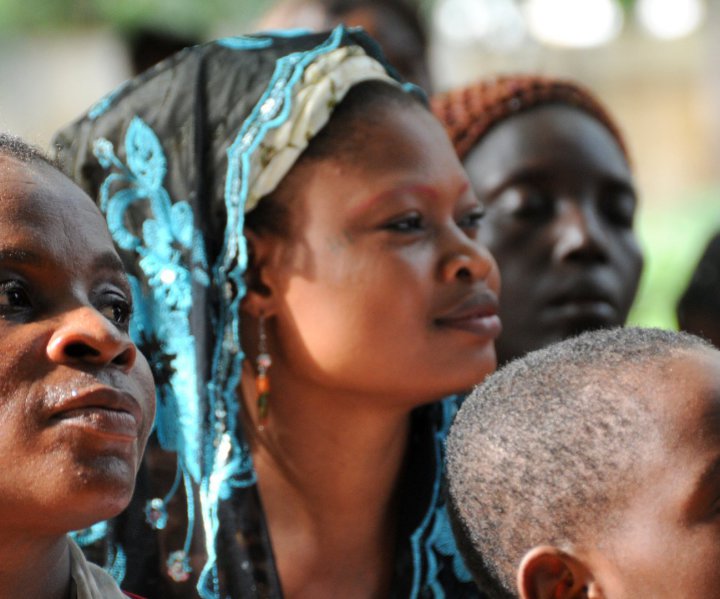 Echoppe recognizes the intrinsic value of each person in an effort to build a community that preserves the integrity and the dignity of each individual. Today, more than one third of the population is affected by the... 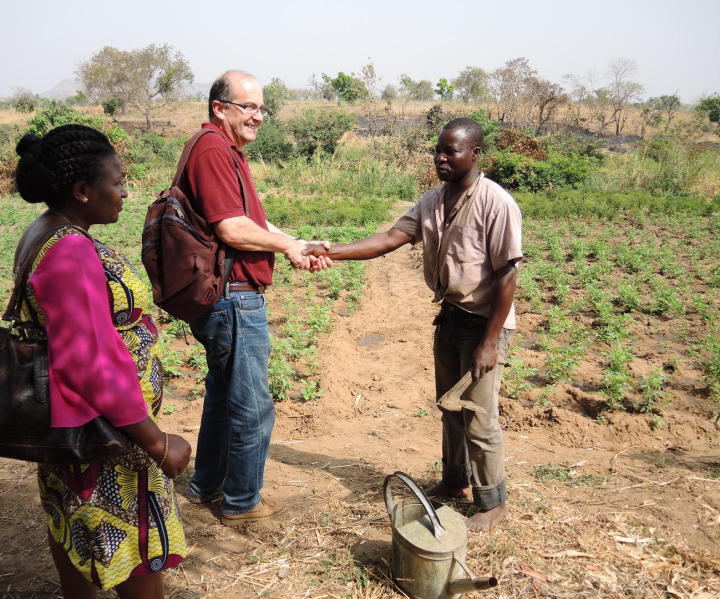 1- Using the Economy as a mean to Social Empowerment

3- Operating in both urban and rural areas to regenerate the link... 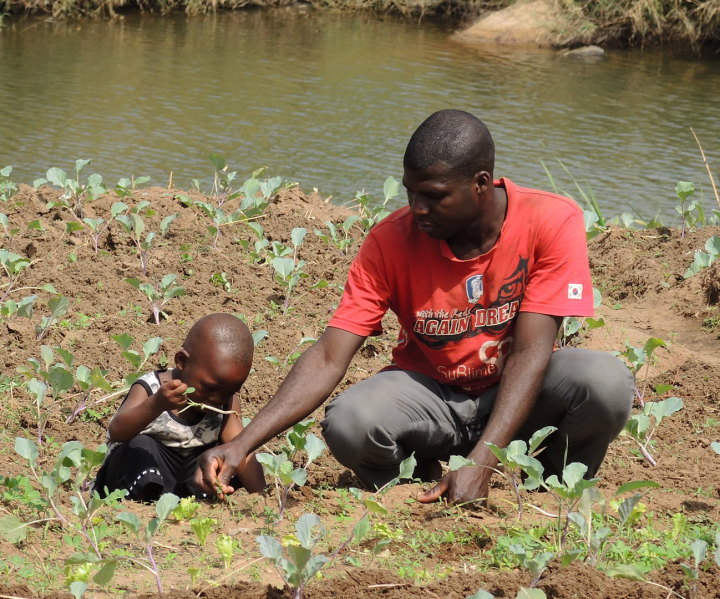 Support the Town and Country program

Creating a direct link between producers and consumers to produce economical alternatives and improved life styles.

"ECHOPPE empowers people through  social responsibility and by creating economic and social change for the very poorest."  (Beverly Ott, Co-founder)

ECHOPPE: Exchange for the Organization and the Promotion of Small Entrepreneurs

ECHOPPE is a non-profit US/French organization that has worked in several parts of Africa:  Togo, Bénin, Mali, and the Central African Republic. It aims to break the cycles of poverty through supporting individual initiatives for economic improvement and social growth. Working primarily with women, ECHOPPE empowers individuals to support themselves and their families and encourages them to become citizens in a larger society.

ECHOPPE is unique because it meets people where they are, helping them by supporting their ingenuity and determination. By providing loans and services to the extremely poor, it not only reaches people untouched by broader interventions, but also has the greatest impact for the resources invested. 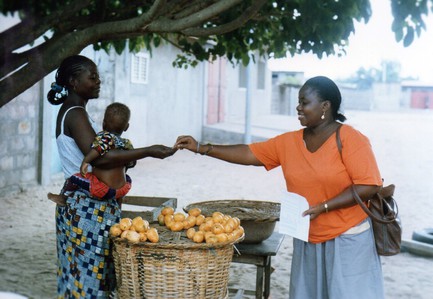 Giving is important. Helping people succeed economically is an investment in the long term.

ECHOPPE has worked for 30 years now proving that poverty is not a fatality.  ECHOPPE was the first in Africa to begin and succeed with a small loans program that got women and families on their feet; not only by loaning money, but also by follow up with social services helping respond to the real problems that cause poverty.  Women learn about their rights and their responsibilities.  This work empowers them as members of society, to act toward change and become leaders in their own communities .  For more information see "our story".

Over the past five years, ECHOPPE in Togo has begun working with small farmers in order to fight against the rural exodus and  for the maintenance of the small farm.  Women vendors from the city work with small farmers to sell the farm produce.  Farmers are ensured of sales and have loans from the association to start their work, buy seed, etc.  Women are given access to larger than usual loans in order to buy goods directly from farmers rather than the imported produce from the port.  ECHOPPE has also created the social enterprise:  "Planète Paysans" or Planet Farmers in English.  This enterprise has a demonstration farm and hopes to be able to also finance partially the programs in the long term instead of always depending upon outside financial support

﻿﻿﻿﻿More than one third of all the farmers participating in the Planet Farmer program are women.  This in addition to the women market vendors, helps to create an economic exchange in the lives of these families that empowers women, but also tries to integrate men into the actions - respecting the rights of all.

ECHOPPE promotes what is called the "social" economy by supporting programs both in France and in Africa supporting small farmers and fair trade. 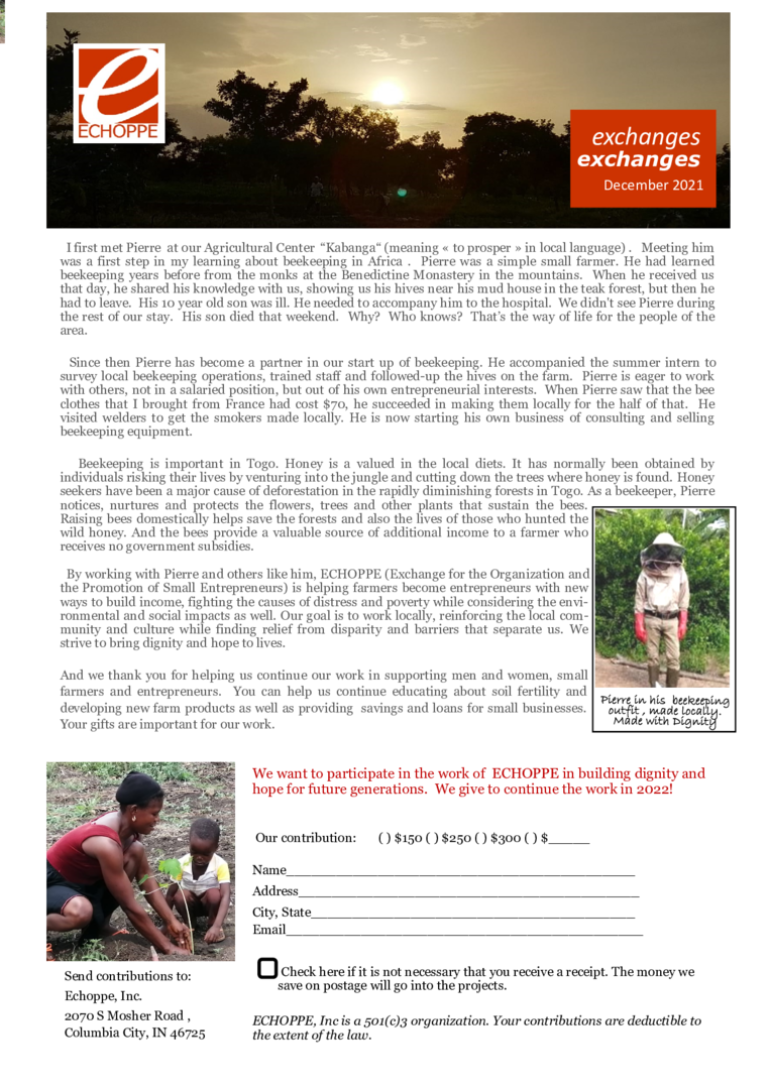 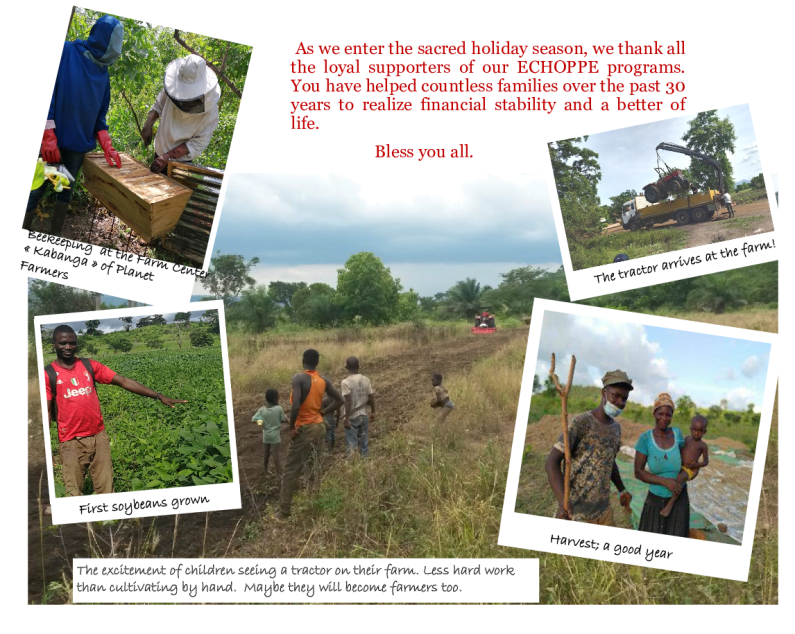 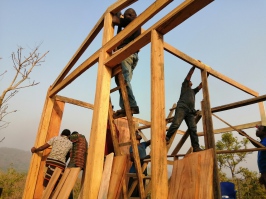 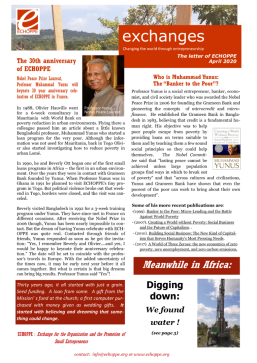 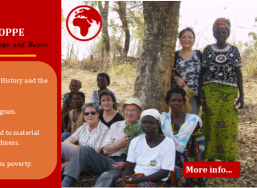 Each year we sponsor trips to Africa in order to enable persons to understand what is happening. We don't paint all the buildings to make things look nice, nor do we dwell on the poverty. We have a mission and it is important that people understand that solutions are not easy, that cultures are different and that what you give really does and has made big differences in the lives of people.

Visit the rubrique "Take Action" and download our latest newsletters